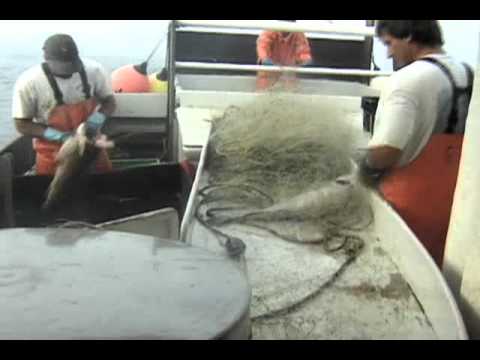 Ads by Amazon
Share on Facebook
Share on Twitter
Share on Pinterest
Share on LinkedIn
Gillnetters account for a large percentage of the commercial fishing fleet of New England. Though its history is centuries-old, beginning with the Native Americans, contemporary gillnetting took hold only in the 1970’s with the modernization of the small- boat fleet from handlining and longlining. Experience one day in the life of a New England gillnetter. Captain Stuart Tolley and his three-man crew steam five hours east of Chatham, Cape Cod out to the fishing grounds known as Dwyers, just west of the Atlantic’s famed George’s Bank. Underwater sequences show how gillnets catch cod and haddock. You’ll also learn how gillnetters decide where to fish, how the fish are hauled and processed on-board, and where the catch goes once they return to shore. The Fishtown Educational Series documents the men and women of the New England fishing industry who continue their way of life despite an increasingly uncertain future. Winner of the Gold Documentary Award at the Houston Film Festival.